True or False: Bobby Frasor is the only player in the Roy Williams era to start every game as a freshman.

True or False: A freshman has started at least one game in eight of 15 seasons in the Roy Williams era.

Keep reading to find the answers.

Opposing college coaches hinted towards Coby White being the best player on the 18U USA Basketball team this summer.

Rechon “Leaky” Black has grown to almost 6’8, but he can play point guard. That’s an actual quote from Roy Williams.

The hype is heavy.

Will any freshman crack the starting lineup?

Who is a one-and-done?

How does the freshman class fit into this roster?

In order to add some color to these questions, let’s revisit how past freshman classes have done just that.

This table shows a percentage of possible minutes played and games started for every freshman class since 2003-04. Data is pulled from Sports Reference, GoHeels.com, and kenpom.com.

See a different look at this information in the following charts:

Carolina heads to the Bahamas this weekend for exhibition action & freshmen hype is higher than ever, so here's an unscientific chart 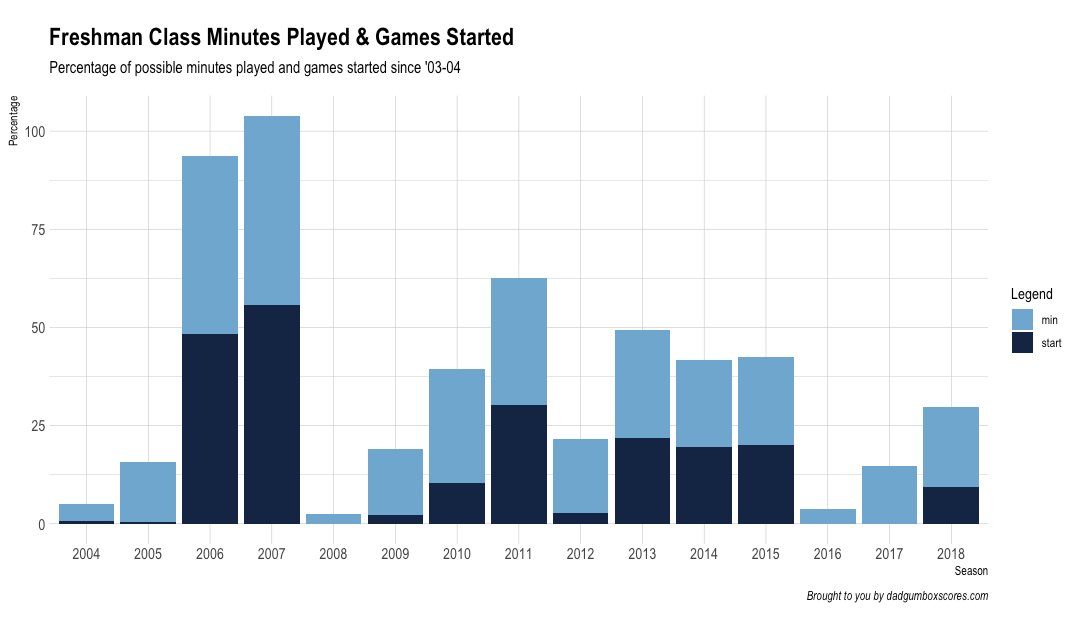 Let’s use this data to answer some of the true or false statements:

Despite having one-and-dones Marvin Williams and Tony Bradley off the bench, freshmen played a higher percentage of minutes during the 2009 Championship season.

The freshman class of Ed Davis, Tyler Zeller, Larry Drew, and Justin Watts combined to play 1,282 of a possible 7,605 minutes during the ‘08-09 season.

Tyler Zeller started his first two collegiate games, but later broke his wrist that season. It’s possible these numbers would be even higher without that injury.

And just a reminder Ed Davis did things like this off the bench:

False: A freshman has started at least one game in eight of 15 seasons in the Roy Williams era.

A freshman has started at least one game in 12 of 15 seasons under Roy Williams. The only seasons without a freshman making a start?

A few of these seasons are extremely close to proving the above statement to be true.

Let’s review this data on a player level. First, this chart shows the top-20 players in percentage of possible minutes played and games started since 2003-04. This table shows a percentage of possible minutes played and games started for all freshman since ‘03-04.

True: Bobby Frasor is the only player in the Roy Williams era to start every game as a freshman.

This was a surprise. Tyler Hansbrough, Brandan Wright, Harrison Barnes, Wayne Ellington, and Justin Jackson were all close to starting every game as a freshman. Frasor quarterbacked the 2006 squad that exceeded any expectations they had at the start of the season.

Nate Britt joined Marcus Paige in the backcourt during his freshman season and started 16 of 34 games.

One-and-dones Marvin Williams and Tony Bradley never started a collegiate game. It didn’t matter. Both players were drafted in the first round. Danny Green’s collegiate career was a bit of foreshadowing to his NBA career. He came off the bench before coming a starter on the roster.

Joel James started 3 games during his freshman campaign, while Brice Johnson started a pair of games and J.P. Tokoto didn’t make a start during the same season. While James started more, it was Johnson who earned 26.3 percent of possible minutes to only 19.4 minutes for James.

So what does this all mean for Nassir Little, Coby White, and Leaky Black?

We’ll find out in a few months.

It’s clear you don’t need to start at all to make an impact or pump up your draft stock. See Marvin Williams and Tony Bradley. And while Williams and Bradley never made a start, fellow one-and-doner Brandan Wright started 37 of 38 games during his freshman season.

Whether a player starts or not sometimes has more to do with opportunity at a position than talent. Bobby Frasor started all 31 games as a freshman, but made only 11 more career starts once Ty Lawson was on the roster.

And just because a player doesn’t see a lot of minutes or starts as a freshman, it doesn’t mean they’re not capable of developing into someone who might find their name in the rafters. Tyler Zeller and Brice Johnson say hello.

Here’s hoping the trio of Little, White, and Black add some highlights similar to these this season.

Sticking with the freshman theme this week, threw together highlights from freshman over the last 15 seasons

With Little, White, and Black all getting their first taste of action this weekend with exhibition games, here's hoping they'll be adding highlights of their own soon pic.twitter.com/1FhK0fKRUk